It started at Clasky Commons Park. Ozy and I both felt called to the park for evangelism, but each of us also felt compelled to bring our shofars (which we had never blown in public before) and neither of us told the other we were bringing them!

Jacob Corbet also showed up as well as My wife and step-son Tyler. 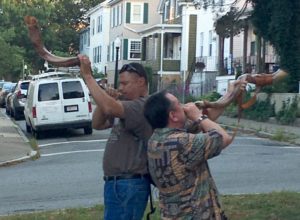 We were able to share with at least 8 people from what I could tell. Prayed with most and one person for healed from a problem with their leg.

Obedience was rewarded for sure)

This is a professional shofar 48″ and sounds great ! (ram’s horn at top, with the smaller 36″ yemenite in middle, and new 48″ yemenite at bottom)

Got home all excited to tell Sue about it only to have her call me because her car wouldn’t start and she was stranded in Wareham !

Guess I’ll wait a day or so to tell her about the shofar after all ?  LOL 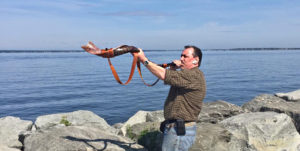 Brady and Melinda listened to testimony, talked about themselves, prayed for Brady (who has autism and ADHD) who reads bible, blew my shofar and let me pray for him while Sue prayed for Melinda while her sister listened

Vic and Anne listened to testimony and says he prays everyday

David and Michelle listened to testimony and took tract. 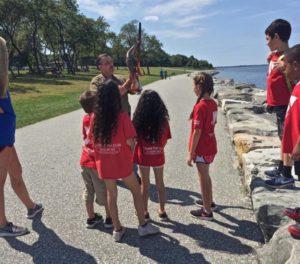 Spent some time talking with Dave and Sharon, Christians and married for 59 years. We encouraged each other and shared testimonies with each other

Teenage girl was entranced by shofar and took a track

Two more Christian ladies who wanted to hear the shofar Julia and and Kianna (grand daughter).

Tim prayed for us to be effective ministers.

Excellent day with God … He certainly blessed our faith in Him. 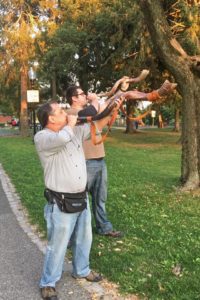 Went great! Four people (out of a group of six listening at one time) accepted Christ and prayed with me

Prayed for young man with mother.

Debated Cindy who said she was a Christian but was not into that “born again nonsense” and said she would get into heaven by being good. Further discussion seems to indicate she might have cultural  knowledge of Christ but never really read her bible. We discussed her need to go to the source of what she believed, rather than taking other people’s word for truth.

Blowing in front of city hall

Took Tyler with me.

Two people got saved a little after that! (sorry, no pics)

at church service as ceremony to celebrate his stepping forward to be a disciple of Christ.

remarkable experience of God moving in new ways. brought my shofar with me (as encouraged by my wife) and ended up using it all weekend for evangelization of the Springfield, MA area.

We saw people healed, people saved, and the shofar was a power tool. 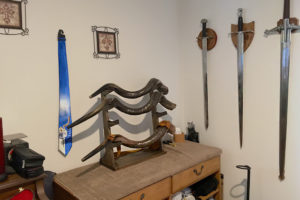 Much has happened over the winter of 2017, job changes, residence changes for members, new members added to the shofar group … (winter preparation, focus adjustments, prioritizations, etc)

these shofars are in my office.

I’ve added a 51″ Yemenite shofar to my arsenal, sounds great !!

We are a team of disciples using the shofar to evangelize the area with the Word and voice of God. (We reach out with the Word to the unsaved and the saved alike).

God has been using the Shofar (and those who sound it) to call His people, instruct His people, and relate to His people throughout the history of creation.

In just a week, the team has grown from 2-7 people with a passion to use the shofar to evangelize their areas.

“Thanks for all the prayers. It was a really beautiful day. Started off slow started to walk around the park and of course God led me straight into a group of about 14 people got to share them what God was doing and how he shines through us. Ended up praying for everyone as a group a really amazing experience. After ran into about 3 other people and only briefly touched on how God was at work and how I was worshipping. Really glad I listened. Step out in faith brothers. Learn the Lord’s voice I promise you that you will be blessed more than you can imagine.”

That is 17 people touched by God’s voice in one morning as a result of one man-of-God answering a simple call: “Go, that they may hear me”.

On Sunday, we drove to the Portland lighthouse and I used my shofar ,,,

Got to share with 10+ people about God (encouraging a woman who was afraid to share her faith, and encourage a Sunday School teacher with the privilege he has each weekend to share truth with the kids) and spoke with 3 Jewish people about modern day shofar use and Christianity’s foundation in Judaism.

We spoke about how he is waiting for the messiah while I believe He already came and fulfilled the law. I asked him what he thought it might be like in his life if he “still offered animal sacrifices according the law and suddenly heard that that the Messiah paid the full price for his sins and that he was no longer under the penalty of the law?” That while the law was still good and reflected God’s unchanging Holiness, our sins could no longer separate us from the Father because of John 19:30 “it is finished”.  I think I planted a Sequoia sized seed in that conversation. Pray for a harvest on that one !

A symbolic gesture of focal point in my life.

God moves me into a ministry of moment by moment faith (rather than most of the things I currently do which tend to be planned way out in advance).

It felt really good to put the shofars as a showpiece of the living room for any guest to ask about upon seeing them.

Got to spend the entire half hour talking about how the Watchmen use shofars to share the Good News with people in parks and public places.

Will be broadcast on New Bedford public access channel 95 !!